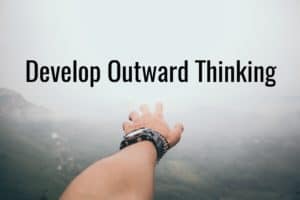 The most effective formula for exerting real, positive and lasting influence on others is to consistently think of others first.

Gordon B. Hinckley, a personal hero of mine, once said, “The best antidote for worry is work. The best medicine for despair is service. The best cure for weariness is to help someone even more tired.”

He recalled a time early in his life when he was far from home on an assignment, feeling forlorn, abandoned and discouraged, and he received a simple piece of unexpected advice that transformed his life: “I wrote a letter home to my good father and said that I felt I was wasting my time and his money. My father was a wise and inspired man. He wrote a very short letter to me, which said, “Dear Gordon, I have your recent letter. I have only one suggestion: forget yourself and go to work.”

Placing other people’s interests first starts with our thinking. It begins as a mindset, an attitude, and it’s that other-oriented thinking that drives behavior that is both uncommon and powerful.

It’s not about you – it’s about them!

The focus of an influencer is always on the audience.

If you are a speaker – it’s about the people listening to you.

If you are in sales – it’s about your customer or prospect.

If you are a leader – it’s about the people you are leading.

If you are a teacher – it’s about your students.

If you are a parent – it’s about your children

Almost everyone has this backwards. They think being influential means they need to become polished or powerful. Influence, though, is all about the audience. Be it an audience of one or one thousand. When it’s about them, they get it, and we grow in their eyes.

By thinking out instead of in, by concentrating on others instead of on us, a tremendous transformation takes place. We go from inner directed to outer directed, from taker to giver, from self-centered to others-focused, from tightfisted to generous, from shortsighted to farsighted, from selfish to selfless. We begin to see and act on behalf of others’ needs ahead of our own; our thoughts are in terms of “we” instead of “me.”