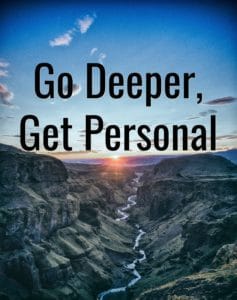 A while back I went to a networking event for lunch. There were about eighty people there and we were assigned to tables with eight at each table.

Throughout lunch, the conversation was good, but it was somewhat awkward and very superficial. Everyone wore a nametag with their name and the name of their company, so the typical question was directed at the name of the company on the nametag. “Tell me about XYZ company?” or “What do you do at XYZ?”

Then the event director introduced an activity. We went around the table and each of us had two minutes to answer a personal question and then two minutes to talk about what we do professionally.

The personal question was either “What is a mistake you have made in the past?” or “What has been a memorable sporting event for you?”

I don’t think it mattered what the personal questions were. What mattered is that they were personal. When people began to open up and talk about personal things, the mood, conversation and connection at the table changed.

People were laughing and interacting more naturally. They were interested and engaged. The conversation was no longer superficial. It was genuine.

I came away from that experience with some clear realizations.