Who Cares Who Gets The Credit? 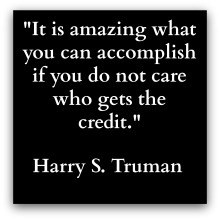 As a leader have you ever been moved to action knowing that you will not be the one to get the credit? Leadership comes in all shapes and sizes and often winds up in places that you least expect it.

A little over a year ago I heard a song on The Voice that was emotional and beautifully done. The original version of the song was done by Great Big World entitled “Say Something.” Music has a special way to move us by completely being relatable, heartfelt, happy, sad or sometimes just entertaining. In other words it touches you and makes you feel something. Apparently that is just what happened when Christina Aguilera heard this song for the first time. She loved it and wanted to know everything about the artists and song writers. She was on a mission. The short story is this – she tracked down Great Big World and Christina proposed a collaboration – she felt this was a song that needed to be heard and that she could help that along because of who she is and since Great Big World was just getting started, it was a win/win for everyone…including the audience!

Most people view Christina as one of the most talented vocalist of our time, but also as a “Diva.” Most people don’t know the “real” Christina Aguilera! You are now thinking why are we having this discussion… As it ends up Christina gave all of herself in this situation without “top billing” or true recognition of any kind. She promoted the song with the group with vocal collaboration, at her appearances; at the group’s appearances; and on The Voice. She doesn’t take a solo part in the song or do anything to stand out – she simply harmonizes with Great Big World and it sounds perfect and adds so much to the original version. Listen to the video and hear what I mean. Here is a link: https://www.youtube.com/watch?v=O23-OjPyR9A Christina even dressed down as not to draw attention to her. In the end the song was heard by a larger audience and it helped to get the name Great Big World noticed by more people.

Christina is the type of leader who does not need to take credit. Her effort is certainly undeniable but she highlighted the original artists that gave birth to this song, not her own agenda.

It is amazing to know that if we just look around examples of leadership can be found anywhere and everywhere. Andrew Carnegie said, “No man will make a great leader who wants to do it all himself or get all the credit for doing it.” Leadership is not the same today as it was years ago. The old ways that leaders were represented do not fit any more. What kind of leader are you? Do you want your team to succeed as much as you want yourself to – or are you the type of leader who is in partnership with the team and truly believe it takes each part of the team to create success?

“It is amazing what you can accomplish if you do not care who gets the credit.” ~ Harry S. Truman