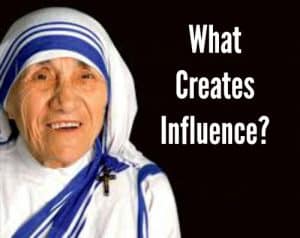 J. R. Miller said, “No one can understand that mysterious thing we call influence … yet … everyone of us continually exerts influence, either to heal, to bless, to leave marks of beauty; or to wound, to hurt, to poison, to stain others lives.”

According to the dictionary, influence is “the power to sway or effect based on prestige, wealth, ability or position.” That definition would seem to suggest that affluence determines influence.

And yet, one of the poorest women, in terms of financial wealth, the world has ever known was also one of the most influential: Mother Teresa.

In a life devoid of materialism, Mother Teresa spread her influence of love and selflessness around the world. It was her lack of position, as we normally think of it, which touched so many. As much as anything she did, it was her words that spread a legacy of love:
• “Every time you smile at someone, it is an action of love, a gift to that person, a beautiful thing.”
• “In this life we cannot do great things. We can only do small things with great love.
• “One of the greatest diseases is to be nobody to anybody.”
• “Even the rich are hungry for love, for being cared for, for being wanted”

When I think of the people who have had the most influence on me, their influence isn’t based in what they have; it comes from who they are. A more all-encompassing definition of influence comes from Bob Burg and John David Mann in “The Go-Giver:” “Your influence is determined by how abundantly you place other people’s interests first.”

Influence isn’t about position or title – it is about care, concern, service and selflessness. It is about creating value and impact. This is what creates lasting influence.

PrevPreviousAre You Genuinely Happy For Others?
NextWisdom from Brene BrownNext