Are You Genuinely Happy For Others? 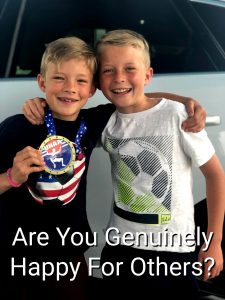 I have two boys.

They are best friends.

Last year they become obsessed with American Ninja Warrior. Everything in our house became an obstacle and we soon found a ninja gym near our house for them to attend classes. Last month both boys competed in an area competition, Drew in the 6-9 age group and Tanner in the 10-11 age group.

They both did great, but Drew qualified for regionals and Tanner did not.  Last Saturday Tanner and I went with Drew to support him in his regional competition. Drew did great and qualified for Nationals! It was so cool to watch but that’s not what I was most proud of on Saturday.

I watched Tanner cheer on Drew without a hint of jealousy, just genuine excitement. I actually had two different parents comment on how sweet of a brother he was and how they were impressed with Tanner’s support of his brother.

It’s been said, “Pay attention to people who don’t clap when they see you win.” I believe one of the most likable traits is when you can be happy for others. It requires maturity to not feel threatened by others’ success, but truly successful people are excited for others because they feel confident in who they are.

In my book The Power of Influence I call this outward thinking.  “By thinking out instead of in, by concentrating on others instead of on us, a tremendous transformation takes place. We go from inner directed to outer directed, from taker to giver, from self-centered to others-focused, from tightfisted to generous, from shortsighted to farsighted, from selfish to selfless. We begin to see and act on behalf of others’ needs ahead of our own; our thoughts are in terms of “we” instead of “me.”

“Numerous studies have shown that people who are selfish tend toward worry, loneliness, anger and unhappiness. People who eliminate “I” and focus on others are much happier — and exert much greater influence –in the long run.”

In my professional life, the person who I see embody this attribute better than anyone I know is Jason Hewlett.

Jason is an extremely successful and talented speaker and entertainer, but what I admire in him most is his ability to cheer on others. He is always supportive and affirming. Even more than that, I have watched him go above and beyond to promote others’ events, achievements and content. He regularly writes blogs that highlight other people. He’s the best friend and cheerleader for those around him and people love him for it.