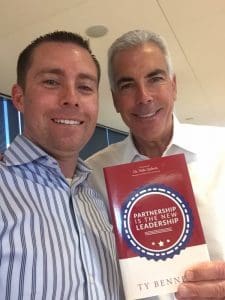 A few days ago we lost a great friend & leader. Scott Schwerdt has had a great influence in my life and he will be missed.

One of the great lessons Scott taught me was the value precedes influence. Scott added value wherever he went and because of that he carried great influence. This is an excerpt from my book Partnership Is The New Leadership where I highlight Scott’s example of this principle.

My friend Scott Schwerdt is president of The Americas Region for Nu Skin Enterprises, a multi-billion dollar company based in Provo, Utah. Scott has been with Nu Skin for more that 25 years and is an adored leader and employee. Before starting with Nu Skin more than two decades ago, Scott worked for the CIA. He loved what he did but it wasn’t conducive to the young family he and his wife were starting. So Scott left the CIA and moved to Provo to be near family.

He began to look for work and interviewed with Steve Lund, the co-founder of a new company called Nu Skin. Scott bought into Steve’s vision and saw great potential with the company and Steve also connected with Scott and thought he would be great to add to the team. But as is the case with many young companies, funds were tight and they didn’t have the money to pay Scott what he was asking. Steve called Scott to tell him the unfortunate news. He said, “Scott, we would love to have you as part of the team but we simply can’t afford you right now. I am sorry.” Scott’s reply was probably shocking: “Well then I’ll work for free to start.”

And that is what he did. He showed up because he believed in the company and knew he could help. He did help, and continues to help. Over a quarter of a century the company has expanded by leaps and bounds and Scott has been part of the growth and had opportunities to grow in position as well. He has gone from a customer service manager to account manager to eventually president of one of the seven areas of the world for the company.

I am not implying in any way that Scott does not deserve the promotions he has been given – he has earned every position and bonus. But I want you to put yourself in the owner’s shoes– would you not feel absolute loyalty to someone who came to work for you for free?

The idea that value precedes influence is the opposite mentality of the instant gratification, give-it-to-me-now world. The rampant attitude is, “If you pay me more, I will work harder.” “If you give me the promotion then I will put in the extra hours.” That actually has it backwards. You do whatever “that” is well, dependably, for a long time, and THEN they pay you more because you have earned it. True leaders know that when they add value they grow their influence. They approach a situation with an attitude of service and giving. They think, “What can I give?” instead of “What do I get?”

The first time I ever met Dr. Stephen Covey (famed author of The Seven Habits of Highly Effective People) he taught me that most people go through life thinking that it is about achievement, but when we learn what life is really about, we realize it is about contribution. There is a big difference.

Astute leaders understand that learning to focus on contribution and not achievement, on others and not yourself, provides the mindset to know that value precedes influence.

PrevPreviousHow Does Influence Work In The Real World?
NextWhat Are You Willing To Sacrifice?Next