What Are You Willing To Sacrifice? 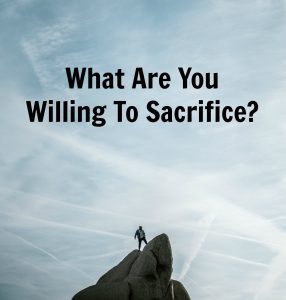 Anything great requires sacrifice. The recognition of the need for sacrifice and the willingness to act on it is a quality of the successful.

I recently met a new friend that was looking to make a big change in his career. To get hime where he wanted to go, he felt he needed coaching and so he decided to sell his beloved mountain bike to invest in this coaching, a big sacrifice for him.  He knew that making a hard choice now would have dividends in his future.

Most of the time, those big, life-changing dreams we have are going to require sacrifice, whether that’s time, money, comfort, possessions, you name it, but sacrifice really does come before success.

So what are you willing to sacrifice short-term for your long-term reality?