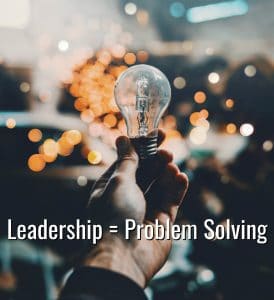 A few weeks ago we realized that we lost the one and only key to one of our four-wheelers at our cabin.

I rolled it up the trailer and took it to the local ATV shop and asked them to put in a new ignition so that we could have a new key.

They had to order in the part and so it would take a couple of days.

They called three days later saying that it was done but I wasn’t heading back to our cabin for another week.

When I arrived to pick it up they realized that they hadn’t put in the new ignition, the part was just sitting there.

They said they could put it in quickly but when they went to put it in they realized it was the wrong ignition.

The problem was that I had a group of people coming to my cabin the next day for a retreat and I needed the four-wheeler.

They were at a loss on what to do. They had created a problem and I was not happy about it. We needed to solve it.

After a couple of minutes at a loss of what to do, I suggested they take the ignition out of one of their other machines they had for sale and then replace that with the correct part when it came in. They weren’t sure if they could do that and so I asked to talk with the manager. I explained the situation and so solution I proposed and he agreed. 10 minutes later I took my four-wheeler with the new ignition back to the cabin.

This type of situation happens in business all of the time. It could be problem’s with customers, sales, morale or a myriad of other problems that arise everyday.

Are you a problem solver?

PrevPreviousWhat Are You Willing To Sacrifice?
NextEpisode 1: Becoming A Broadway Star with Sandra Joseph (Christine Daae in Phantom of the Opera)Next