How to Deal With Negative Feedback 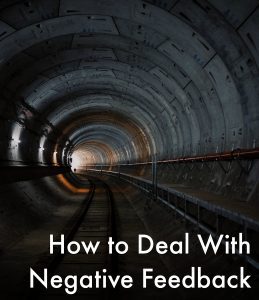 We all get negative feedback at times. That can come by way of a performance review, a critic, a well-meaning friend, rejection or through other tough experiences. We will all face mistakes, failures, and naysayers at some point – so the question isn’t how do we avoid negative feedback, but rather what do we do with it.

What drove me to write this post was the survey feedback I received from a particular conference a couple of years ago. I was the closing keynote speaker on leadership to a state association of CPAs. I felt the conference went well and the feedback was positive and afterwards as we had agreed to before – the client sent me the evaluation forms.

I received some great feedback. Here are a couple of comments:

The overall rating for my speech was a 4.58 on a 1-5 scale. But – the survey feedback also contained a couple of the most scathing comments I have ever received as a speaker. Here is the one that really hurt.

“This guy was full of bull crap! Very staged – every word, phrase, gesture planned. His book reviews on Amazon look phony. We really had a leadership speaker come in and give us an example of what he learned as a 17 year old.   …   Didn’t share anything new. Just a bunch of warm fuzzy stuff he read on the internet or from emails that were forwarded to him. Starbucks? Come on. … This was a dark pit for me.”

Ouch! When I first read this it made me angry, and I felt embarrassed. I wanted to just dismiss it but I don’t think that would make me any better.

So how do we deal with negative feedback?

Here are three suggestions on how to make the most out of negative feedback.

When we are first confronted with negative feedback, we typically experience all sorts of emotion that we are not in control of. It is very seldom positive or productive to respond based on emotion. We are built to act and not to react – so we need to give a little time for the emotion to pass. Wait until you can think clearly and not emotionally to decide what to think of the feedback and more importantly what to do with it.

It may seem counterintuitive but we need to dig deeper to get more information from the negative feedback we receive. There is a difference between critics and those who are critical. Critics are not worth your time or attention. Robert Lewis once wrote, “Nothing is easier than fault-finding; no talent, no brains are required to set up in the grumbling business.” If your negative feedback comes from a critic – someone who is just tearing people down because that’s what they do – then don’t pay them any mind. But if the feedback is critical in nature but comes from someone who is offering real feedback – then dig deeper. The more you understand what they are saying – the more you can find truth in their comments. The example that I gave above was hurtful but once I let the emotion pass and reread it looking for truth and concrete feedback – he was right. Well, he was mostly wrong but the fact that Starbucks is an overused leadership example is true. I have since removed it as an example in my speech and replaced it with personal experience and examples and it has helped my speeches go to the next level. Looking in the mirror and making changes is hard – but necessary.

Negative feedback is painful but useful. If we let the emotion pass, dig deeper and feel gratitude – negative feedback can turn into a positive catalyst for growth and improvement.2