Effort Is A Skill 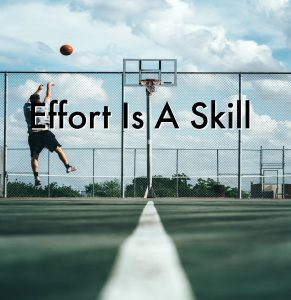 On Nov 14 in the NBA the Jimmy Butler saga ended when the Minnesota Timberwolves trader Butler to the Philadelphia 76ers for Robert Covington and Dario Saric.

If you aren’t a basketball fan, Butler was demanding a trade and it turned into an ugly ordeal.

The interesting thing has been how much better the Timberwolves have been since the trade.

A big reason for the uptick is the addition of Robert Covington. Covington is a skilled player but nobody would argue he’s more skilled than Jimmy Butler. What he brings to the table is an intangible that’s hard to measure.

He is a guy on the court that plays hard on every play. Cheers on his teammates. Dives for loose balls and his energy is contagious – he raises the collective energy of the team.

Here is my takeaway – Effort is a skill.

And just like on an NBA team – there are energy drivers in many organizations.

Effort is a skill and maybe that’s what you can bring to the table to impact your team.