Confidence Will Change Your World 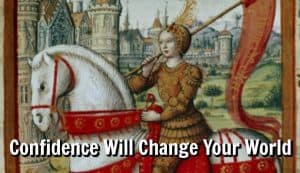 The word confidence means to go forward with faith. Self-confidence causes you to act. It is bold but not overbearing. It dispels doubt and fear. It is personal power. Ralph Ellison said, “Power doesn’t have to show off. Power is confident, self-assuring, self-starting and self-stopping, self-warming and self-justifying. When you have it, you know it.”  When you have confidence in yourself, you gain confidence in others. Great leaders have great confidence. It is attractive, focused and contagious.

Many military leaders were known for their supreme confidence on the battlefield. One of those was Napoleon Bonaparte. The Duke of Wellington said,  “In my opinion Napoleon’s presence on the field of battle was the equivalent of 100,000 additional troops. His very name acquired a mythical power and his supreme confidence of himself was transferred as if by magic to those serving under his command.” No wonder so many people followed him!

Confidence is not fake; it is grounded. It is built on strong self-esteem and a positive self-image. When you possess confidence you will be cheerful, optimistic and assured. Your relationships will improve, your business will flourish and you will be happier.

One of my favorite examples of confidence from history is Joan of Arc. Joan was born an ordinary child in a little French village in 1412. As a child she was healthy and happy, possessing a merry disposition.

At this time France was suffering through its Hundred Years War with England. France had lost nearly every battle. Eight thousand Englishmen had wiped out sixty thousand Frenchmen at Agincourt. The French were hurting and their courage and confidence had been lost. They had become, in essence, nothing more than a British province.

It was then, at the age of thirteen, that Joan began to feel that she would be God’s instrument in setting France free. And while she questioned it at first, she accepted her calling with full confidence, saying,  “If it is commanded, I will go. I know that France will rise again, for God has ordained her to be free.”

Joan, now seventeen, went to see the Dauphin, who was the uncrowned heir to the throne. The Dauphin said to her, “Tell me who you are.” Joan’s reply was, “I am called Joan the Maid. I am sent to say to you that the king of heaven wills that you should give me men-at-arms and set me at my appointed work. For I will raise the siege of Orleans and break the British Power.” Joan then said to the Dauphin, “Be not afraid, God has sent me to save you.”

Joan’s confidence and sincerity won the confidence of the Dauphin who gave her command of the French Armies. In a public proclamation the Dauphin said, “Know all men, that the most illustrious Charles, by the grace of God, King of France, is pleased to confer upon his well-beloved servant Joan or Arc, called the Maid, the title, emoluments, and authorities of General-in-Chief of the armies of France.”

Louis Kossuth said,  “Since the writing of human history began, Joan of Arc is the only person of either sex who has ever held supreme command of the military forces of a great nation at age 17.”

She had a suit of armor made for her at Tours. She rode a white horse and carried the sacred sword of St. Catherine. She led the men to Orleans with supreme confidence that success would be theirs.

With what seemed to be an impossible task to most, Joan said to one of her generals, “I will lead the men over the wall.” The general replied, “Not a man will follow you.” Joan said, “ I will not look back to see whether anyone is following or not.”

The soldiers did follow their courageous leader and on May 8, 1430, she broke the siege at Orleans. This day is still celebrated as Joan of Arc day. It is the day she saved France. Then, she and her troops marched to Rheims and crowned the Dauphin king.

PrevPreviousLeaders Keep Learning
NextWhat is Your Word For 2017?Next