Communication Is a Balancing Act 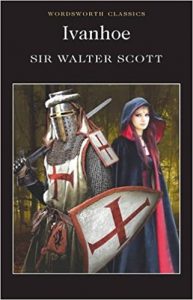 Ivanhoe is a novel set in twelfth century England written by Sir Walter Scott in 1820. Characters include King Richard, Robin Hood and Friar Tuck. It highlights the conflict between the Saxons and the Normans as well as the Christians and the Jews in that time period.

Ivanhoe is a Saxon knight returning from the crusades. He wins the championship of a jousting tournament sponsored by Prince John but is injured badly. The beautiful daughter of Isaac the Jew named Rebecca nurses him to health.   Rebecca is wooed by many knights templar but refuses them all. She is arrested by the Templers for witchcraft and is sentenced to be burned by fire.

As she defends herself, she is described as resolute but not defiant.

I love that line: resolute but not defiant. I think communication is a balance, and just like Rebecca, we must find that balance. It’s being confident but not condescending. It’s being assertive but not aggressive. It’s finding a way to be credible while at the same time relatable. It’s finding a relaxed intensity.   In the words of Stephen Covey, we each need to find our voice, and that voice is a balance.