5 Mistakes That Will Kill Your Culture 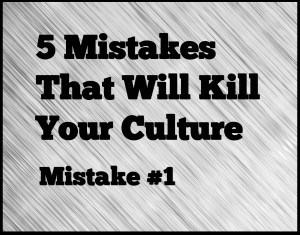 Your culture will be your catalyst to outperform the competition and provide the type of service that creates loyalty. It’s what takes you from success to significance in the eyes of your customers.

The old adage said that leadership is what drove business, but in today’s world, culture drives business. As the leader, your job is to embody, encourage and inspire the culture of your organization.

Culture has become the hot word in business today. A lot has been written on the subject, with many examples of who has gotten it right.

As I have studied the culture of hundreds of organizations, I have found that successful cultures are often very different from each other. They value and believe different things and yet each is finding success. So instead of giving you the formula for building the perfect culture (because I am not sure there is a universal formula) I want to instead warn you of five mistakes that leaders often make that kill culture.

Over the next five weeks (on this blog) I am going to break down these mistakes one at a time.

1. Hire For the Wrong Reasons

Terrell Owens was a great football talent. He played fifteen seasons in the national Football League, was named All-Pro five times, caught more passes than all but five players in NFL history, and is the only player ever to score two or more touchdowns against all 32 franchises. that’s the bright side of the story. The problem was getting into a team. Owens played for the San Francisco 49ers, Philadelphia eagles, Dallas Cowboys, But also Bills and Cincinnati Bengals – five different franchises – and was released by every one of them because of some kind of controversy or conflict. every time the pattern repeated itself. Lured by his immense skill set, teams continued to bet they could handle his me- first attitude, only to find out it wasn’t worth it.

As I’ve talked with numerous successful CEOs about culture, every single one of them has said something to the effect that you hire for attitude and you train for position. A sure way to kill culture is by trying to force something to fit that has the potential to ruin morale. (Owens once led the Cincinnati Bengals in receptions, yards and touchdowns for the season, but after a 4-12 won-lost record they still let him go). In the hiring process, prospects obviously need to have the skill set necessary for the position, but we also need to look at who they are, the values that they profess, and do they fit into our culture. Will they add to it or take away from it? Ability alone isn’t enough to sustain culture.