5 Mistakes That Will Kill Your Culture – Week 2 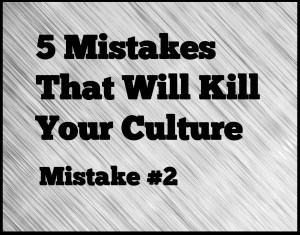 Your culture will be your catalyst to outperform the competition and provide the type of service that creates loyalty. It’s what takes you from success to significance in the eyes of your customers. This week we are continuing to break down the 5 Mistakes That Will Kill Your Culture. They are:

Last week we discussed hiring for the wrong reason – click here to catch up – This week we will be delving into the second mistake – Focus on Tasks and Not Purpose.

The object of this is to teach the leadership approach that creates commitment from your people. Nothing more, nothing less. Committed people get more done, do it better and make a bigger impact.

People aren’t committed to jobs or companies, they are committed to people. Leaders who are seen as honest, authentic, genuine, caring, and fully invested will attract a loyal, dedicated following. But wise leaders know there’s more to the commitment equation. Equally as powerful is purpose. When people don’t feel like they are performing a task, but instead feel like they are changing the world – they will feel inspired. When they see the why as well as the how, their commitment grows. Partner leaders focus on establishing a purpose and engaging the team around that. Tasks drive the bare minimum, but a sense of purposefulness drives going well above and beyond.

My friend, Cindy, told me a story that every leader who wants to create a strong culture needs to head and understand.

Several years ago Cindy and her kids noticed that two robins had built a nest in one of their trees. As they paid attention to the robins’ activity they realized there were eggs in the nest. Those eggs soon hatched four baby birds.

Cindy and her kids took ownership of the baby birds. They loved to watch them and would check on their condition regularly.

Then one day as Cindy was putting clothes away in one of the kid’s rooms – she saw something she’d never seen before or since. More then a dozen birds were flying around the tree with the robin’s nest. Cindy rushed out to see what all the fuss was about and saw all different types of birds were attacking the tree. Instinctively, Cindy ran to protect the baby birds and what she found was amazing.

The birds were dive-bombing the tree because a snake had wrapped itself around the tree and was trying to get to the baby robins. The birds were doing everything they could do attack the snake and save the baby birds.

Cindy thought quickly and grabbed a shovel and used it to pull the snake off the tree. It slithered away and when Cindy eventually turned around all of the birds were sitting on the branches of the tree looking at her as if to say thank you. Then they flew away.

So what does this story have to do with culture?

As leaders trying to establish a strong culture, it is important to establish your values and beliefs. By defining what you believe and who your common enemy is – you bring people together to fight for a cause.

Companies that have been praised for their cultures understand their cause and it brings them together. They live their values, share common beliefs and fight against their common enemy. Zappos is fighting mediocrity in customer service. Target is fighting to democratize designer fashions. Southwest Airlines is fighting to make the travel experience fun. Each of these examples feature leaders who have helped to create a culture where a common enemy brings their people together to fight a cause.

Leaders do not drive business – culture does. Leadership’s job is to create and maintain a positive culture that has a mission that is clearly defined and understood by all.

P.S. – To not leave you hanging, the baby birds were saved.