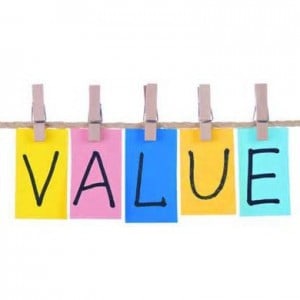 In the 1940’s a small boutique financial services firm was just beginning to finally see a bit of success.  They had started out when two people came together with the hopes to create something great.  They decided at this point to add someone to their marketing department.  They found a guy named Charles Engle – a journalist by background who at the time was working as an editor of a magazine, that had just started to have some experience in advertising and marketing and he found that he really loved that much more than he loved journalism.  So when this job opportunity came up he was just the perfect fit for them.  He did not have much experience and they did not have much money – Perfect Fit.

He begins his job and starts to look at what they are doing when it comes to marketing.  Now at that time you have to remember how financial services worked – stock brokers knew things that most of the rest of the world did not.  That’s how they liked it.  They didn’t want people to understand the stock market; they wanted to be the sole owners of that information.  They wanted to be unique at a commodity that people had to come to them because they knew things that other people did not.

Most of the ads that were run at the time were pretty straight forward, a couple hundred words – things like “come straight to us if you want to make money, we will help you invest in the stock market.” – Just a straight forward pitch.  And Charles Engle as he started to look at it said, “How can we add value to our people?  How can we give them value in this ad?”

He went to his bosses and said, “Look – what if we shared valuable information?  What if we taught people about the stock market?”  His bosses didn’t get it and thought he was crazy.  “Why would you want to do that?”  His response was…”If we give them value, we invest in them – then they will want to invest in us.”  Charles wanted to show his bosses what he meant so he wrote up an ad.  They read it and said, “there is some really good information here, are we giving away too much?”  His reply was – “the more you give away, the more they are going to want.”  They decided to run the ad.

The ad was 6500 words – this is like an eBook today – this is a huge ad.  Within a week that ad produced 3,000 leads.  Now that is not in the time we live in today where it’s a hyperlink click on your iPhone.  Here is what that looks like:  you read it in the newspaper, cut it out, go home, fill out the form, put it in an envelope, put a stamp on it, take it to the post office and send it in – that’s the kind of lead that was.  They got 3,000 leads! And over the next 5 years that ad produced over 5 million leads and turned that little boutique financial services firm into the company you and I know as Merrill Lynch.