Service Makes You a Better Leader 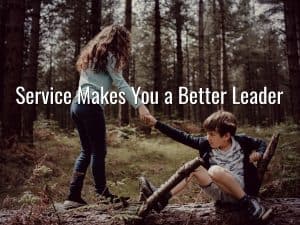 A study at the University of Kent in southern England was dedicated to figuring out how givers are perceived. Researchers conducted an experiment called a “cooperation game” in which participants were each given a small amount of money and asked to contribute to a common fund.

Next, the researchers doubled the common fund and passed it out equally to members of the group. In this game, the best thing for everyone is to continually reinvest their money and keep doubling the fund. But if you’re crafty, rather than cooperate you’ll be tempted to hold back some of your money. That means that you get your own money, plus a chunk of everybody else’s. As the experiment showed, there are always those people who opt to do so.

Then the researchers conducted a second phase of the experiment in which the participants were separated into teams and asked to elect leaders.

They found that 82% of the leaders who were elected were those who had given the most back during the first phase.

Service. It is the great paradox of positive self-fulfillment: to get all that you want, give others all that they want.

That counsel was given 300 years ago, but the wisdom is timeless.

Now, as then, serving others is the key that will make you happier, healthier – and a person of tremendous influence.