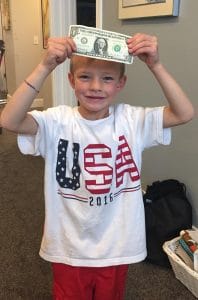 Last week my six-year-old son Drew invented a new game. The board was a torn piece of cardboard with marker & the pieces where taken from an old box full of mismatched toys. He said he wanted to sell it to someone. His older sister mocked him and said, “Who would buy that?”

Drew didn’t seem to hear her and went out to go door to door to sell his new invention (I apologize to my neighbors).

Within five minutes he walked in with a huge smile on his face and a shiny dollar in his hand.

He immediately went into his sisters room and said, “Remember you said that no one would buy my game? Then how do you explain this?” & he held up his dollar & walked out.

I have to admit I might have teared up a little because I have lived that experience.

If you haven’t had people tell you can’t do something or it won’t happen – you probably aren’t far enough out there on the limb!

When I decided to write my first book and pursue speaking as a career I had a friend and mentor very bluntly say, “No one will ever pay you to speak to them.”

I immediately thought of a favorite quote: “A successful man is one who can lay a firm foundation with the bricks that others throw at him.” – David Brinkley

Successful people use adversity as fuel & it drives them.