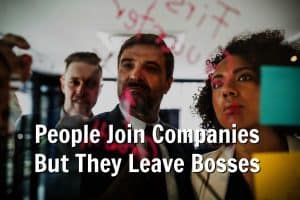 This week I spoke for a Pharmaceutical company. In preparation for my speech I interviewed a couple of their sales reps over the phone and went on a ride along with another rep. I found it interesting that all of them at some point brought up their loyalty based off of the relationship they had with their manager. They said things like:

You’ve probably heard the saying that people join companies but they leave bosses.

The bureau of labor statistics reports that today’s average worker will have fifteen to twenty jobs before they retire and the #1 reason for changing jobs is bad management/bad culture.

Le Roy H. Kurtz of General Motors once poignantly observed: “The fields of industry are strewed with the bones of those organizations whose leadership became infested with dry rot, who believed in taking instead of giving … who didn’t realize that the only assets that could not be replaced easily were the human ones.”

If that is true then the questions that every leader needs to ask themselves are:

If people join companies but leave bosses (which they do) then we need to step up our leadership game!