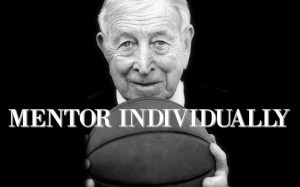 I have realized that there are some key steps to empowering your people and building leaders not followers. Mentoring is one of the best ways to do so. A mentor is “an experienced and trusted adviser,” one who shows the way. It isn’t bragging or showing off. John Wooden said, “Mentoring isn’t about celebrating your own insight but about sharing wisdom. When you pass on the lessons of your life with someone else, it’s not you who are teaching – it’s your experience.”

To mentor individually means to pay attention to each person’s interests, desires and capabilities, to recognize that everyone doesn’t fit the same mold, and wisdom is most effectively shared one-on-one.

Mentoring is an investment in your people which requires time, energy and effort on the part of the leader.

My friend Don Yaeger, who coauthored The Two Most Important Days of Your Life with me, used to write for Sports Illustrated. While he was at SI he heard that Coach John Wooden was mentoring Shaq (who played for the Lakers at the time) and he thought there might be an interesting story in their relationship. So Don called Shaq and asked if he could sit in on their mentoring session. Shaq agreed and Don spent the day with Shaquille O’Neal, one of the best basketball players in the world, and Coach John Wooden, one of the greatest coaches the game has ever known. What amazed him is they talked about everything. Life, kids, marriage, and basketball. At the end of the day, Don asked Coach Wooden, “Coach, why did you agree to mentor Shaq?” Coach Wooden simply said, “Because he asked.”

After Don returned to Florida and wrote the story, he called Coach Wooden and said, “Coach, I feel like I need to ask.” Coach Wooden slyly replied, “It’s about time.”

That began a twelve-year mentoring relationship where Don would fly to California once a month and spend a day with his mentor. He recorded thousands of hours of conversation and advice from arguably the best basketball mind on the planet. Don would tell you, though, he was an even better man.