Limitations Are Mental and Self-Imposed 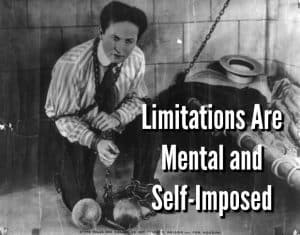 What holds you back?  What really stops you from achieving?

My first foray on stage was as a magician. You can laugh now but when I was 12 years old I was a magician at birthday parties, community events and even a state fair.  I loved magicians and of all the magicians I think the greatest in the world was Harry Houdini. If you’ve ever seen anything, read any books, or seen any TV shows on Harry Houdini you know he was a master magician, but more importantly he was probably the greatest escape artist in history.  He escaped from everything, it didn’t matter – chains, ropes, locks, underwater, he could escape from anything. And at one point in his career, he kind of issued a challenge.  He told the world that he could escape from any jail cell in the world within an hour and he did it on several occasions. And then one day there was a jail that was built in Great Britain and they thought it was the greatest jail ever so they issued the challenge to Houdini.  They said, “Come and test it out.  We’re pretty proud of our jail.  So come and escape.  We don’t think you can do it.”  And Houdini loved the publicity and he certainly loved the money, so he decided to come do it.

By the time he made it over to Great Britain, the whole country was in a frenzy, they were so excited for him to come. Houdini got there, he walked into the jail with this swagger and this confidence that only Houdini had.  He had escaped from everything in his life.  The jail cell closed and Houdini took off his coat and he got to work. Hidden inside he belt he pulled out this little piece of metal.  It was flexible but it was pretty strong and he started to go to work on the lock. After about 30 minutes, he was getting pretty frustrated.  The lock was not moving.  After about an hour he was perspiring heavily. After two hours he got so exhausted, he literally collapsed and he fell against the door and it opened.

You see, the door was only locked in his own mind. At any time that great escape artist could have pushed that door gently and he could have walked right out. I love that story because it illustrates an important point.  Limitations are mental and they are self-imposed.  So often we doubt ourselves, we limit ourselves, we doubt our potential in out abilities.  Don’t doubt yourself. I love what Price Pritchett said.  He said “If you are going to doubt something, doubt your limits.”