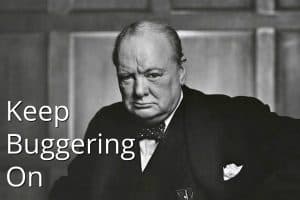 Sir Winston Churchill had a phrase that he used at the start of each day and at the end of every telephone conversation: Keep Buggering On (Keep Plodding On if in the presence of a lady). The British Bulldog, Churchill was never one to back down. He was as tenacious as they come and would take a hit and get back up swinging. It’s that spirit that got England (and maybe in even the Allied world) through World War II. That tenacity is integral to anything important — winning a war, starting a business, finishing a novel, raising a child, battling illness, making a living, running a marathon, learning the violin.

Early on in the war, the current Prime Minister resigned and Churchill was appointed Prime Minister. He held the position through the difficult war era, but lost the reelection in 1945, the sentiment being that his success during wartime surely couldn’t be repeated after. But Churchill kept buggering on and won reelection the in the next election and was able to hold the position until his resignation in 1955.

We all can take a page out of the Churchill playbook. Success and greatness takes work. It takes effort and it takes a great deal of just buggering on when the odds are against you.