How To Win The Sales Number Game 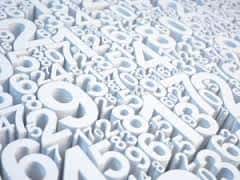 In my previous life – haha, in my twenties – my brother and I built a large business in direct sales. We had a substantial sales team that focused on selling nutritional supplements through doctors’ offices. In the direct-sales industry there are a couple of sayings that have become almost universally accepted.

In essence, they’re saying that it’s a numbers game. It’s volume that matters. Quantity over quality. Your presentation isn’t that important, it’s how many times you give it that’s important. The more people you talk to, the better your chance of success.

For several years I bought into that philosophy, but at some point I began to realize that it preaches the wrong doctrine, that such thinking takes away the responsibility to be better. If you constantly dismiss your failure as an indication of the industry as a whole, you alleviate yourself of the challenges to engage the prospect, present with persuasion, and move people forward.

We realized that persistence doesn’t matter unless performance improves. So we began to train our people differently. Instead of simply giving sales ideas and providing motivation, we began to do in-depth training that involved interactive role-playing and the development of people skills. We analyzed what approaches got the best results and what approaches were less effective and passed that along to the sales force.

All of our sales people began to record every presentation they gave and to go back and analyze those with the intent of learning how they sounded and where they could improve. We developed training manuals and a training website that went in depth on every aspect of product knowledge as well as presentation skills. Our sales team became amazing at asking questions, at assessing a prospect’s needs, and individualizing the presentation to fit those needs.

As we made our people better, the numbers game changed. It’s not that we weren’t willing to do the volume, we still worked hard and did the numbers, but after the change in training, our percentages got better.

A client of mine, Centegra Health Care Systems of Illinois, recently asked me to work with their leadership over a several month period. When I met with the executive team, I asked them to describe the role of their managers, which is the group I was going to be working with.

Their response was, “Our managers’ job is to remove obstacles so that things flow smoothly.”

And it showed. As I got to know the company that includes over 4,000 employees I could see that the strength of the organization was in the careful attention the managers paid to making sure their people were well trained and had excellent working conditions. It was no surprise that Centegra successfully gained approval from the state to open just the second new hospital in Illinois in the past 30 years.

A partner leader motivates, he inspires, he leads by example, but more importantly, he helps his people do their job well. He makes them better.

PrevPreviousAre You Leaving A Legacy?
NextThose Who Tell The Stories – Rule The WorldNext