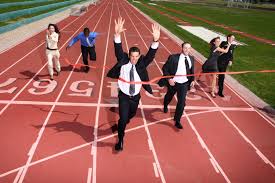 I help to coach my daughter’s competitive soccer team. They are in fourth grade and are a really good team for their age group in the state.

Last week, I set up a set up a scrimmage with a sixth grade team. These girls were older and bigger but they don’t play at the same level and don’t know the game as well as our girls.

As we began the scrimmage, our girls were timid and very worried about how big they were. They weren’t playing their game because they were intimidated.

After a couple of minutes, I finally got them to stop focusing on the sixth graders and instead play soccer the way they know how.

We started passing, being aggressive, spreading the field and we won 6-0!

In business we often worry too much about the competition instead of just being the best at what we do.

In life we worry too much about what others are doing instead of just being our best self.

We win when we stop focusing on others and instead focus on winning.