People Support What They Help Create 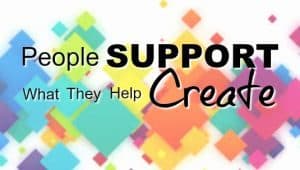 One of the key lessons I teach leaders is that – People Support What They Help Create.

Our world has changed, and rapidly. Fifteen years ago, if you wanted your voice to be heard, you pretty much only believed it was heard if you held a position of leadership. Social media has changed all that and I don’t mean just because people have Facebook or Twitter or LinkedIn where they can go and voice their opinion. It has changed the psyche of our world. It has caused everyone to feel like his or her voice should be heard. Regardless of where people are in your organization, they mentally believe that their voice and their opinion matters. As a result, our top-down directives don’t work the same way they used to. We can’t just throw things at people and expect them to jump on it, to run with it, and go for it. We need to understand that now more than ever. People support what they help create.

One of the important tenets of leadership and in influence is co-creation. When people create it – they support it.

So how do we become better at involving our people?

Yesterday I had a call with the leadership team at USAA. I am speaking for them later in the month and as I asked about their culture, their challenges, what’s working and what’s not – they gave me the perfect example of this principle in action.
The mortgage division of USAA has been in the process of changing and evolving over the last couple of years and they brought in a new president to run the division named Winston Wilkinson. Winston immediately began a regular practice that he calls ‘Lunch with Winston’ where he eats lunch with 10 or more people and asks them for their feedback and ideas. At first the employees thought this was trite but once they began to see their ideas being implemented, they saw it for what it really was and began to take a different level of ownership in their jobs.
Winston effectively gave his people a voice and by so doing gave them a sense of ownership.
In other words – People Support What They Help Create.
This principle is one of the greatest lessons that any leader can learn because if we want the commitment of our people at the point of implementation then we need to involve them at the point of creation.