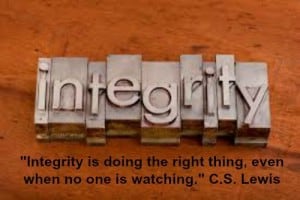 Integrity is often talked about as a soft topic, and in business it seems that it is overlooked or forgotten. One thing we have to recognize though is that Integrity affects the bottom line of your business.

Several years ago, I was hired to speak for a Law Firm that was having an event in New York City. They called me directly and said that they found me online.

When I got to the event, I had breakfast with the meeting planner and CEO before I spoke and somewhere in the conversation they mentioned that they found me on Executive Speakers Bureaus website and then they called me directly.

I gave the speech and was paid. Then I called Richard Schelp, the owner of Executive Speakers Bureau, and told him that I needed to send him a check – the normal commission that Speakers Bureaus make when they book a speaker.

I did it because it was the right thing to do and because I believe that business is about relationships. I wanted to build a relationship with Richard and all relationships are built on trust.

So here is my proof that integrity affects your bottom line.

Over the last four years I have worked with dozens of speakers bureaus. The one who has booked me over and over every year is Executive Speakers Bureau.

Richard Schelp and I have become great friends and my choice to live with integrity was not only the right thing to do – it has impacted my bottom line in a dramatic way.