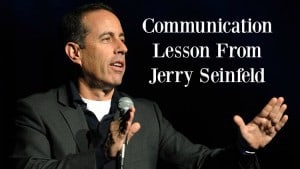 Jerry Seinfeld is one of the most recognized comedians in the world. In the early 90s it was Jerry’s comedy that spearheaded the popularity of observational humor.

Here are a few of his funny observations:

• According to most studies, people’s number one fear is public speaking. Number two is death. Death is number two. Does that sound right? This means to the average person, if you go to a funeral, you’re better off in the casket than doing the eulogy.

• It’s amazing that the amount of news that happens in the world every day always just exactly fits the newspaper.

Jerry is a great comedian and a great communicator and he taught a great lesson on communication when he said, “I will spend an hour taking an eight word sentence and editing it down to five.”

In comedy, the fewer the words between the set-up and the punch line, the bigger the laugh. In business communications, change the punch line or phrase to impact phrase – The lesson is still the same.

In our high paced, content filled world, if we want our communication to be heard and understood – we need to be succinct.

The dictionary defines succinct as concise, and clearly expressed.

We live in a world where most people’s attention span has generally become shorter, while their expectations regarding crisp and clear communication have risen. We live in an attention economy where the Youtube generation expects to get the essence of a message in thirty seconds.

So, are you succinct in your communication? Are you concise? Do you express your message clearly?

Here are three ideas that will help you communicate more succinctly:

1. Increase Your Vocabulary
– Having a solid vocabulary allows you to say things more succinctly. Increasing your vocabulary will help you to discover a better, clearer and more concise way to say what you want to say.
As an example – learning new words will allow you to choose better verbs, which will eliminate the unnecessary adverbs and adjectives.
So pick up a thesaurus, and spend some time beefing up your vocabulary.

– I believe in the rule, “If it’s not necessary to say – It’s necessary not to say.” People add words and content into their communication, stories and presentation that do not need to be there. To avoid this – trim the fat. The best way to do this is to practice. Record yourself and listen to it. Pay attention to parts that drag on. Trim the fat so that you are saying things clearly and concisely.

3. Use Twitter.
-This idea might seem random but if you haven’t tried the social media platform twitter then it is time to start, if for no other reason than a communication experiment. If you’ve ever used Twitter, you know that you have 140 characters to say whatever you want to say. Now keep in mind, I didn’t say 140 words—or even 140 letters—I said 140 characters. That’s not a lot of room. Letters, numbers, symbols, punctuation and spaces all count as characters on Twitter. What all of this means is, you have to be concise. You have to know exactly what you want to say, and say it in as few of words as possible.

Jerry Seinfeld teaches a great lesson in communication – the more concise you are – the more compelling you become.

PrevPreviousFour Reasons Leaders Are Readers
NextAre You A Leader Who Enables or Empowers?Next