Be A Servant Leader 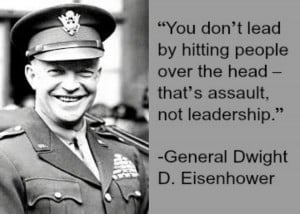 Dwight D. Eisenhower once famously said: “You don’t lead by hitting people over the head – that’s assault, not leadership.”

A soft touch, a willingness to listen and help is much more preferable – and effective.

As supreme commander of Allied Troops during World War II, Eisenhower led hundreds of thousands of men – 160,000 alone in the D-Day invasion – but still managed to make them think he knew them personally. His habit was to get out of his office whenever possible and walk and talk with men up and down the ranks, and he encouraged his officers to do the same.

“You must know every single one of your men,” he taught. “It is not enough that you are the best soldier in that unit, that you are the strongest, the toughest, the most durable, the best equipped, technically – you must be their leader, their father, their mentor, even if you’re half their age. You must understand their problems. You must keep them out of trouble’ if they get in trouble, you must be the one who goes to their rescue.”

In other words, serve those you lead.

Eisenhower embodied the precepts of servant leadership before that phrase was ever coined. That happened in 1970, when Robert K. Greenleaf founded the modern servant leadership movement with a memorable essay “The Servant as Leader,” that inspired a generation of advocates and followers.

After spending 40 years studying management practices of U.S. businesses, Greenleaf’s contention was that the authoritarian style of leadership routinely practiced – where the leader dictates what policies and procedures will be followed without any meaningful input from below – was a killer of both productivity and morale. Instead of being authoritative first, the leader should serve first.

“While traditional leadership generally involves the accumulation and exercise of power by one at the ‘top of the pyramid,’ servant leadership is different,” he wrote. “The servant-leader shares power, puts the needs of others first and helps people develop and perform as highly as possible.” His philosophy attracted many of the top thought leaders of our time, Ken Blanchard and Stephen R. Covey among them.