3 Things Service Does For You 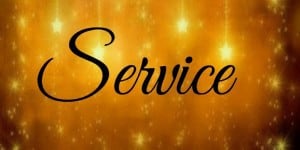 At this time of year many people are service oriented and look for ways to make a difference for others. It is one of the reasons I love the holiday season. And although service is about helping the other person, providing service is truly reciprocal. Here are three ways service also serves the server.

When I was in high school, I decided that our DECA club needed to do something that brought us together and provided service. As we discussed it, one of the girls suggested we provide Christmas for a family who needed it. We all got on board, soliciting donations, money, and food. With a monumental effort, we showed up Christmas Eve at the front door of a tiny home in downtown Denver with three SUV’s packed full of Christmas. We had toys, candy and clothes for the four kids, food to fill their pantry, and some money for the parents.

As we brought in the first presents I set them down next to a tiny, modestly decorated Christmas tree. Under the tree there were already two presents. I read the tags and knew that they were not the names of the children in the family. Curious, I asked the father about them, and he said. “They are for two of our neighbors who don’t have any money for Christmas.” I said, “But you don’t have any money for Christmas.” He said, “I know, but serving makes us happy, and that makes for a great Christmas.”

Serving does make us happy. It brings a smile to your face and warms your heart. It helps you focus on what’s right with the world and yourself instead of on what’s not right.

Allan Luks, a longtime director of the national Big Brothers Big Sisters organization and author of “The Healing Power of Doing Good,” has spent a lifetime studying the many benefits of what is often referred to as the “helper’s high.” His findings show that “there is a clear cause-and-effect relationship between helping and good health,” and that the following occurs after the performance of a kind act:

It’s healthy to give. It doesn’t have to be a huge act, it can be dropping a coin in someone else’s expired parking meter, or paying the toll for the guy behind you in line; it can be as simple as telling someone you like their tie or the shoes they’re wearing, or dropping off a bundle of no-longer-needed household items at the goodwill store. Whatever it is, and wherever and whenever it’s done, it will spread the unmistakable influence of kindness and it will make you feel better.

A study at the University of Kent in southern England was dedicated to figuring out how givers are perceived. Researchers conducted an experiment called a “cooperation game” in which participants were each given a small amount of money and asked to contribute to a common fund.

Next, the researchers doubled the common fund and passed it out equally to members of the group. In this game, the best thing for everyone is to continually reinvest their money and keep doubling the fund. But if you’re crafty, rather than cooperate you’ll be tempted to hold back some of your money. That means that you get your own money, plus a chunk of everybody else’s. As the experiment showed, there are always those people who opt to do so.

Then the researchers conducted a second phase of the experiment in which the participants were separated into teams and asked to elect leaders. They found that 82% of the leaders who were elected were those who had given the most back during the first phase.

Service. It is the great paradox of positive self-fulfillment: to get all that you want, give others all that they want.

That counsel was given 300 years ago, but the wisdom is timeless.

Now, as then, serving others is the key that will make you happier, healthier – and a person of tremendous influence.

PrevPreviousHow To Keep The Proper Perspective
NextDo You Need To Be Passionate About What You Do?Next